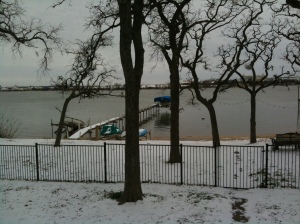 Snow and ice around Lake Worth

What more mundane way to start posting than to talk about the weather? But you have to start somewhere, and the current weather in Fort Worth is pretty unusual.

We got about 2-3 inches of mixed sleet and snow on Tuesday morning. Along with that the temperatures dropped from the 60’s on Monday into the low 20’s on Tuesday. The temperatures have remained well below freezing with morning lows around 13-14 degrees since then, so the accumulation of snow and ice on the roads has not been able to clear.

On Wednesday, two electric power plants went out with mechanical problems, leaving the entire state of Texas in an electric emergency. Oncor, the local electric power distribution company, instituted rolling blackouts to keep the system from overloading. My power was out from 7 to 7:30 am and then again from 10:45 to 11:15 am. Has not gone out since then, so maybe they have been able to bring additional power plants on line.

The forecast calls for another inch of snow tonight. Temperatures are not forecast to get above freezing until Saturday. Schools have been closed since Tuesday. No word yet on whether they will open on Friday.

This entry was posted in Uncategorized. Bookmark the permalink.