Forbes has released their annual list of America’s Most Miserable Cities. California’s San Joaquin Valley did not fare well. Stockton came in at #1, Merced is #3, Modesto is #4, Sacramento is #5, Fresno is #17, and Bakersfield is #20.

Having lived in Merced in the 1970’s, I find this kind of sad. Back then Merced was a very livable place. Of course, I was a teenager back then, so maybe I was not aware of any problems that were there, but I remember it as a thriving community.

Castle AFB was just north of Merced, in Atwater, and there were a lot of military families living in the area. Agriculture was also big business and brought a lot of prosperity to the community.

Merced is ideally situated: about an hour’s drive to the Sierra Nevada mountains, Yosemite, the San Francisco Bay Area, and Monterey. It has a pleasant climate, and at least back then, it did not have any traffic problems. I enjoyed water skiing on Lake McClure nearby in the Sierra foothills, sailing on Lake Yosemite, snow skiing at Dodge Ridge and Badger Pass, and day trips to the California central coast. It was a nice place to live. 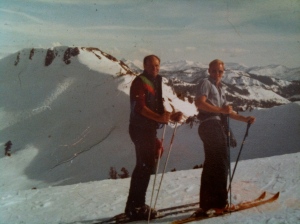 Memories of Merced. Skiing at Squaw Valley with my dad.

So what happened? I have not been back in a while, so I do not have first hand experience with how the situation developed. However, I think Victor Davis Hanson gives a concise description of how it happened in his National Review Online article, Two Californias. In short, over taxation and over regulation drove people and businesses out of many parts of California, and the San Joaquin Valley go hit by extra environmental regulations that severely restricted agriculture.

I hope things are not as bad in Merced as the Forbes ranking makes it seem. Their ranking methodology looks at economic, political, crime, and climate conditions. (It also throws in how well local professional sports teams have done recently. Does that really make a significant difference in anyone’s life?) It does not include the things I remember most about Merced – the nearby lakes, mountains, and coast. Of course, those things are not much consolation if you cannot find a job or have to commute two hours each way to someplace where there is a job, so maybe they should not be included.

I find it hard to believe Merced has become the third most miserable place to live in the U.S. But I am afraid to go back and find out that it is true.

This entry was posted in California and tagged California, Merced, taxes. Bookmark the permalink.

1 Response to America’s Most Miserable Cities