Flying from Fort Worth to Texas A&M for a basketball game combines two things I really enjoy: flying and watching Aggie sports. The weather last weekend was beautiful, one of the club’s planes was available, and A&M was playing Oklahoma State in basketball – an unbeatable combination. I invited a friend from work to go along and looked forward to a fun day.

We got to the airport around 10am and began preflighting the Cherokee Six we would fly that day.

Everything looked good except all the tires needed air. The friendly linemen at Atlantic Aviation quickly took care of that problem, and we were ready to go. We got in the plane and began running through the checklist: seat belts, avionics master off, prop full, mixture full lean, throttle open 1/4 inch, beacon on, master switch on, fuel pump on, advance mixture control… Wait a minute. Why won’t the mixture control budge?

Try wiggling the mixture control a little. Nope. Nothing. Shut everything down. Try the mixture control again. Still nothing. Peer inside the throttle quadrant to see if something is jammed in there. Nothing. Take off the cowl and look inside the engine compartment. Nothing there either. We spent about an hour looking for the problem and could never find it, so we were not taking the Six on this trip.

The other club plane, a Cessna Cardinal RG. was not available because two other club members were going to work on installing new plastic trim on its interior that day. They arrived at the airport as we were working on the stuck mixture on the Six, and when they saw we were not going to be able to take the Six they offered to postpone their work and let us take the Cardinal. Very generous.

Soon we were on our way, still with plenty of time to have lunch with my daughter in College Station and make the basketball game on time. Things were looking up!

The situation improved even more once we got up to cruising altitude. We had a 20 knot tailwind. That gave us a speed over the ground of about 150 knots (~170 mph). This is fun! As a bonus, it was a crystal clear day and the air was smooth. 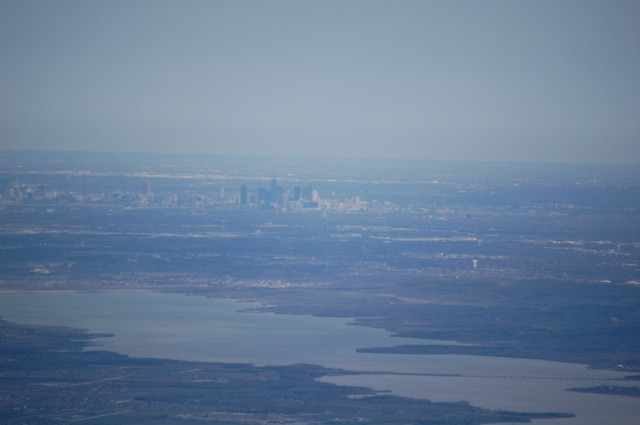 Dallas and Joe Pool Lake from about 50 miles away.

The flight down to College Station went well, and we were soon having lunch at Los Cucos  Cafe. Then it was straight to Reed Arena for the basketball game. We sat down right before the national anthem started, and then watched an Aggie Big 12 win.

The game stayed pretty close most of the way.

After the game, we went straight to the airport to prepare for the flight home. Preflight, engine start and the taxi down to the end of runway 34 went fine. However, during our pre-takeoff engine run up, we discovered the left magneto was dead. As in, when you moved the ignition switch to the left magneto position, the engine would immediately quit firing as if the mixture had been pulled to the cut off position. I did it several times to make sure I was not imagining the symptoms. It was repeatable, so it was time to go back to the terminal and look for a mechanic.

By this time, it was getting fairly late on a Saturday evening, and there were no mechanics around. Great. Stuck away from home with a broken airplane.

Luckily, my daughter was nice enough to lend us her car, so we could drive home that evening. It’s a 3 hour drive, compared to a 1 hour flight. Not unbearable, but not as fun as flying. The only compensation was the we got to stop at Czech Stop in West for kolaches on the way home. Can’t do that in the airplane.

I drove back to College Station on Sunday to get the plane to a mechanic first thing Monday morning. He checked the ignition switch, ground wire, and ignition wiring harness for problems, and they all checked out OK. That points toward the problem being the magneto itself, so it has been sent out for testing.

That is where this story stands. The magneto is on its way to a shop for testing. I will post an update when I find out what the problem was.

And even with all the problems (I left out the part where I got a speeding ticket on the drive home) it was still a fun day. Just not quite what I expected when the day began.